Beginning the year on Whidbey Island 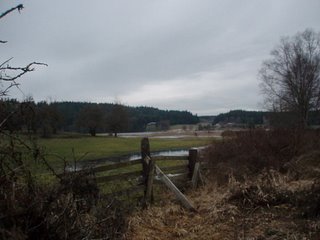 The new year finds me on Whidbey Island, my favorite sanctuary in all seasons. At this time of year, with so much of the foliage denuded, the wetlands in front of the house are even more of a bird-watcher’s paradise. The lake itself has spilled over into the horse meadow and across some of the marsh, so that there are shallower pools spreading all around. These are covered with a variety of ducks and small water birds, while the Canada geese adjudicate on the nearby meadow, taking frequent squawking flights into the bigger lake itself. The cormorants and great blue herons sit on pilings or stand in the water, looking for fish. An occasional eagle wings across the scene. Here in the immediate front yard, the bird feeders and suet cages are swarming with takers, everything from woodpeckers to chickadees, and the spectacular towhees and cedar waxwings. Fat grey squirrels run raids on the feeders, and then retreat up the trees to munch. Am I happy here? You betcha! 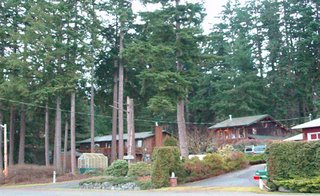 We spent about 2 days clearing limbs and broken branches from the property, and hauling them to the green recycling center. With the tall sentinel pines ringing the whole area, there is plenty of debris after a giant storm such as the one that swept through the Pacific Northwest in mid-December. Luckily there was no major damage here. 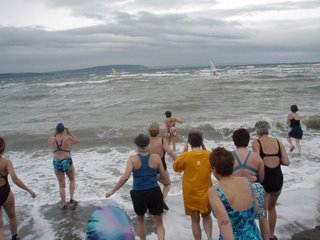 We’re enjoying our many friends in this area, and meeting lots of new ones. This morning we joined a bunch who participated in the annual Polar Bear Dip into the Puget Sound. That is, Daniella joined them – I took the photos and cheered for all who were brave enough to jump into the 47 degree waters! The off-shore winds were ferocious, and the sea was all churned up. There are more photos to see on Daniella's blog. You can see Daniella out in front in the photo above - she ran in ahead of everyone. The photo below shows her and another friend going back in for a second dip! That is definitely not my cup of tea! Brrrrrrrr! 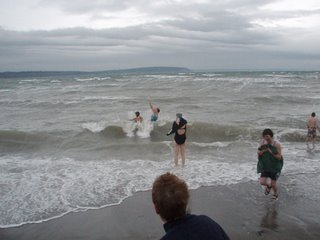 Here’s wishing everyone a fabulous 2007. Let’s do everything we can to move towards an end to war, a healthy green planet, and good health and prosperity for ALL people!
Posted by Kim Tyler at 6:07 PM 5 comments: