Taking a Break, Hitting the Road 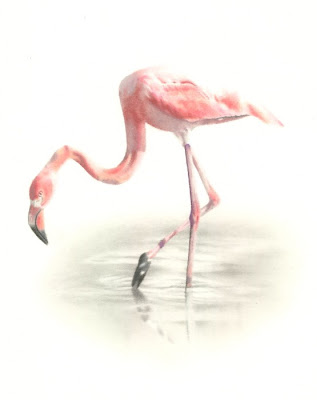 We're off on a trip to the East Coast. First stop is Florida, then driving up through other places we've never been - Savannah, Charleston, Augusta, Charlottesville, etc. The South - a mysterious part of the country that is pretty uncharted territory for me, at least. I'm taking a break from blogging (that has been pretty obvious for awhile), but not because anything is wrong with me this time! It's because we'll be out enjoying the world, having an adventure, and seeing old and new friends and family. Isn't that what retirement is all about??!! Adios for now, amigos....

Shabbos scenes from our dining room 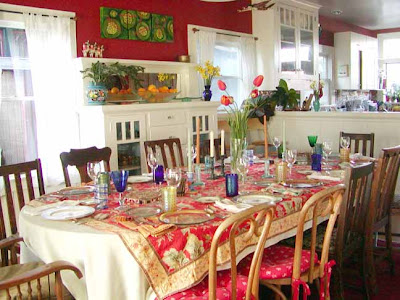 We hosted a Shabbos dinner last night for a group of 12 Jewish artist friends. It was a pot luck with a planned menu, and featured cabbage & brisket soup; a beautiful green salad with beets, pecans, blue cheese, pomegranate seeds, and blood oranges; challah bread with chopped liver; brisket; kasha varnishkes; tzimmes; asparagus; and taiglach for dessert. We had wonderful wines and port, and we laughed and ate and talked into the night. 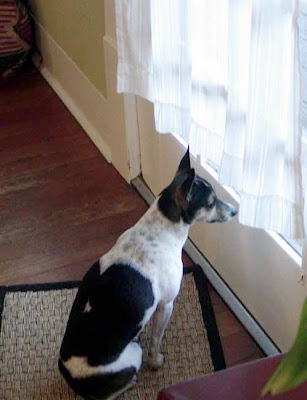 Here is Zuma at the front door waiting for guests to arrive. 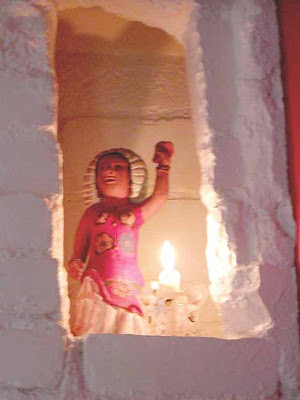 These Mexican folk art figures have been in my dining room since 1967. The collection has grown a little over the years. My exposed chimney has plenty of little steps and niches. 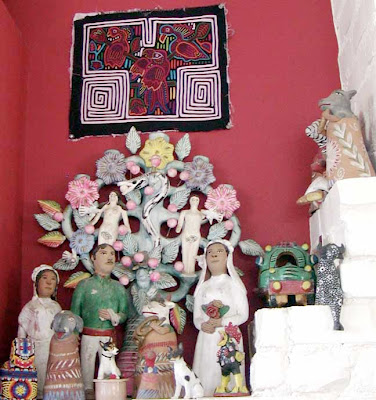 This little dinner gathering was a great antidote to the the nightly news, with all its bad/sad news - a little sweetness in a world that seems to grow meaner and less tolerant with each passing day. We're doing our best to keep open hearts and minds, but it does feel good (I must admit) to see B*sh & Co. taking a bruising no matter which way he turns. Turning towards Latin America has been no cake walk. The sight of that huge, bulletproof black limo entourage sliding silently through the impoverished streets of Sao Paolo makes chills run up my spine. How dare he ride his commodious, air-conditioned, luxury bubble into their cities, dishing up more hypocrisy and more pain everywhere he stops? When will it end, and how, and what can we do to become friendly neighbors once again, rather than hated imperialist enemies?
Posted by Kim Tyler at 2:13 PM 4 comments:

Last night Daniella suggested "how about a little red?" So I went for it. Now she says "too much". Here it is, in three panels (each 12" x 12"), on our red dining room wall. Too much? Not enough? My dear old friend, Philip Thompson, used to say regularly "too much is not enough!" And he lived by that maxim, a life of colorful excess, glorious abundance of decor in his living space, phenomenal meals, luscious poetry, and rich laughter. He thought that beige was the enemy (a true child of the 50's). I miss him so much sometimes!
Posted by Kim Tyler at 6:02 AM No comments: 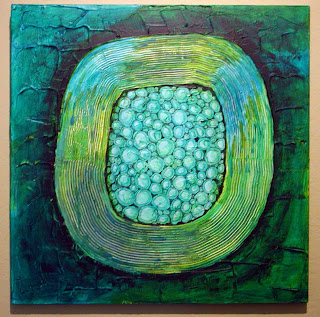 So where did we leave off? Getting happier. Doing a little painting. Working a few days. Losing my mind over politics. Being busy. Yes, all of that. And now, spring is here in Santa Cruz. Magnolias, tulips, daffodils, flowering fruit trees, golden acacia, all are testaments to the turning of the seasons and the lifting of the spirits, big time. Spring is always my favorite time of the year. It's not just about being a spring-born baby, but because of the joy of warm days, flowers bursting out, birds singing, the perfumed air, the green, wet, juiciness of everything. I've been taking long walks, breathing deeply, and smiling.

For some reason I have been painting again. It seems that the artist's block I've struggled with has now gone away for awhile. I'm feeling more free, more experimental, and giving myself permission to just spend hours dabbling with color and shape (see above).

We have also seen a few absolutely terrific films. On Sunday we went to a Jewish film festival and saw one called Wrestling With Angels, about the playwright Tony Kushner (Angels in America). I also really enjoyed a German film called Other People's Lives, a brilliant and thoughtful piece about pre-war East Germany, a story about living in a society where the government spies on everything and everyone (sound familiar folks?). The other one that I can recommend is Breach, the film about the spy, Peter Hanson, who was apprehended at his job in the CIA after selling US secrets for years to the Russians. All of these films raised fascinating social and political issues, and were riveting to watch.

The world is still making me crazy. Hooray that Libby got convicted, but he is a small fish in a very big and fetid pond. It seems like there is no end to the corruption, greed, and foolishness, the arrogant disregard for the views of the general public, the lacerating of the Constitution, the torture and slaughter of innocent people, and the twisted logic that spins and spins and spins to support it all. I mean, gag me with a pitchfork! I can't watch 'W' or listen to his insipid voice for more than about 10 seconds without wanting to smash something!

Anyway, that's all the news for tonight my friends. Sweet dreams.