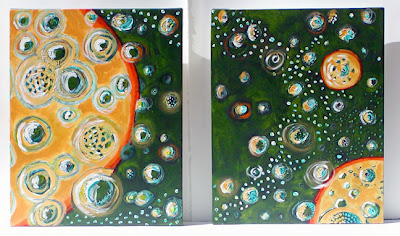 I've been painting again. What happens on the canvas is always a surprise. This one started out as an all black-and-white painting, then took on a life of its own. I'm noticing that my past history as a mosaic artist still has a bearing on how I see the world. And I'm getting a little less scared of "abstract". The last two photos are details. 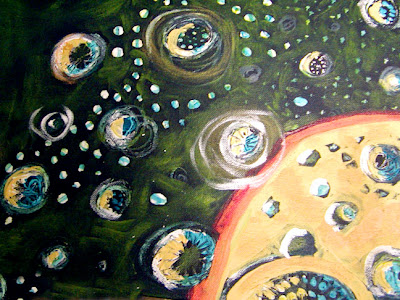 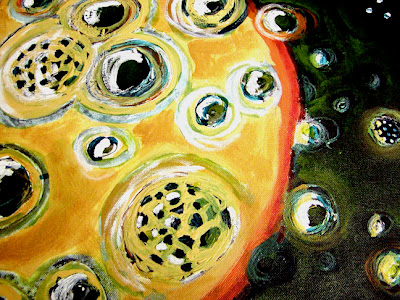 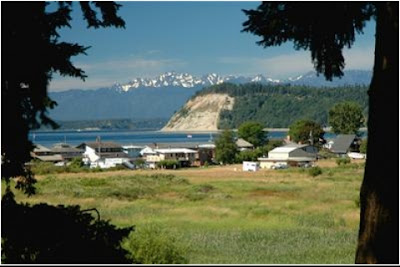 I still often feel at a loss about what to write about in my blog. Tonight I'll write about some of the odds and ends of the day. At my 8 am water exercise class, I met a woman, Monica, who turned out to be from Chile. We found out that we had many things in common, and had a great chat in the hot tub after our workout. I learned from her, among other things, that Whidbey Island is at a latitude in the Northern Hemisphere that corresponds to some parts of Chile in the Southern Hemisphere. This area is very similar in landscape and climate to where she and her husband grew up - who knew?? So they are very comfortable here.

Next I took Zuma to the beach for a romp. It was low tide, and the beach was wide and wet and briny. Some children there wondered why Zuma was afraid of them. A little boy, about 3 years old, said "maybe she thinks I'm a giant!" and his face lit up with a joyous grin at the notion that he might be a giant to someone. Adorable!

From there, I drove around to various places to look at houses for sale. A friend's mother wants to move here, and I've got a notion of what she wants. It's a great excuse to go house shopping, a favorite activity up here! I saw a few losers, a few odd but promising possibilities, and a couple of absolutely stunning places with views to make you never want to leave your front porch again (see photo above for an example).

Then Zuma and I went to a second beach for another run-around before coming home for lunch. This afternoon I worked on a painting I'm making, and that was all about being lost for several hours in the process, and all of a sudden it's 5:30 and the dog is giving me that look like "hey, I'm hungry, I'm bored, are you ever going to come back to this planet?"

Tonight a charming quail couple sat on top of the fence in the back yard, between us and the horse enclosure, looking like they were surveying our back yard for snacks. Later, when I walked Zuma down our street, a pair of crows was kicking up a major ruckus. When I walked down closer to the lake, I could see that a large bald eagle was sitting on the tip-top of a big tree, and the crows were dive-bombing it relentlessly, coming within inches of its head. The eagle was clearly annoyed (did those crows have a nest nearby that they were defending?), and frequently stretched his neck up and snapped at the crows as they whizzed by him. Don't ever think we lack for drama and excitement up here on our little island! It's a happening place, believe me! 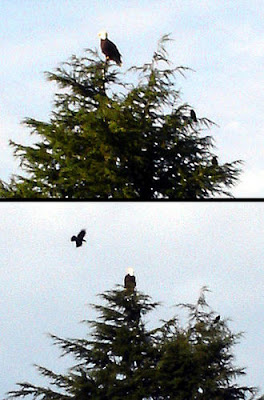 (photo by Ballard Blog)(of course I forgot my camera!)
Posted by Kim Tyler at 8:14 PM 4 comments:

The Deep Green Woods of Whidbey 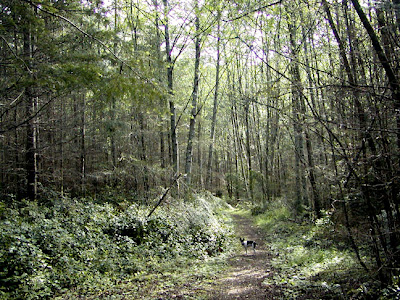 I've often written about the Whidbey Island beaches, lakes, and meadows. Today I've been walking with Zuma (above) on some of the numerous trails through the nearby woods. Many of these trails are used for riding horseback, but they're great for walking too. Mostly when I walk in there I see nobody. The woods are silent except for the numerous bird calls from high above in the trees; the tapping of woodpeckers on old wood; the occasional snap of a branch under my own foot. Otherwise, the silence is complete. No car or airplane noises, no voices, nothing. I feel safe in here. Unlike many places where a walk alone in the woods can be unsafe for a variety of reasons, in these woods I breathe deeply and feel my body relax. The pathways are soft beneath my feet. As I gaze into the deep greens that spread out in all directions, I feel peace and serenity and a sense of timelessness. Zuma, on the other hand, feels frisky, adventurous, and excited. With her tail wagging, she races down the trails, only looking back at intervals as if to say "can't you hurry up??!"
Posted by Kim Tyler at 11:01 AM 3 comments: 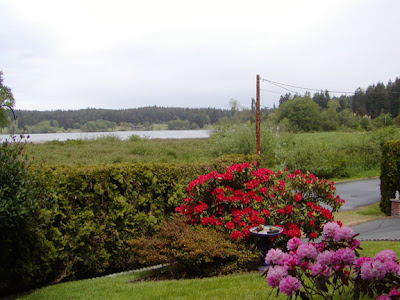 This summer we're staying at our neighbor's house while they are away. Normally we stay in a small studio apartment, but this place is spacious, commodious, and offers all the comforts of a very lovely home! It is right next door to our place, so it shares many of the same views of the lake and the horse farm, although from the back yard the horses are much more up-close and personal. I've taken a few photos to give a feeling of what we're looking at. Above is the front yard, with blooming azaleas. 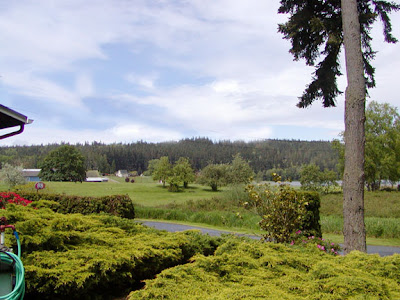 Here is a view from the front of the house looking at the horse pastures, and a glimpse of the lake. 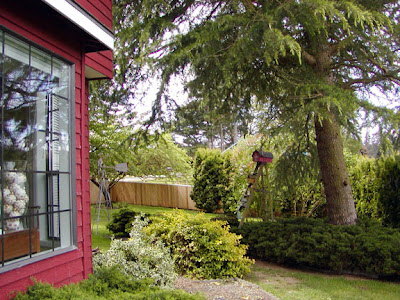 This is the side yard, seen across the front of the house. 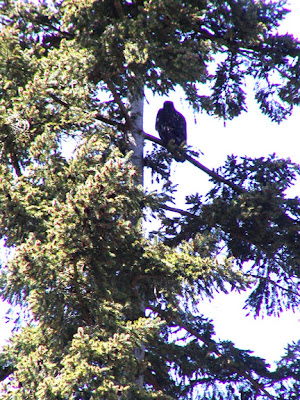 Of course there are always eagles. A few days ago, this huge bald eagle sat for hours on the tree beside our driveway, just watching the lake and the marsh. 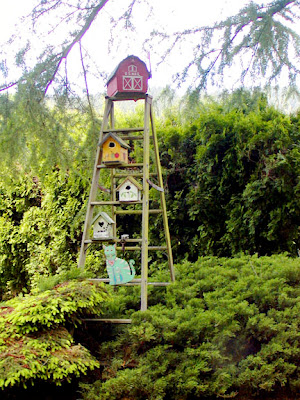 An artistic collection of bird houses in the yard. 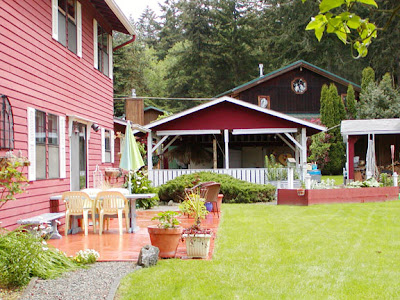 The back yard and patios. You can see our studio in the background, a brown building with a round window. 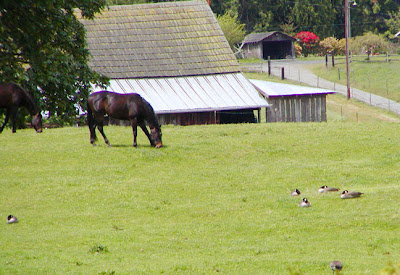 Canada geese sleeping in one of the pastures while the horses graze nearby.
Posted by Kim Tyler at 9:21 PM 4 comments: 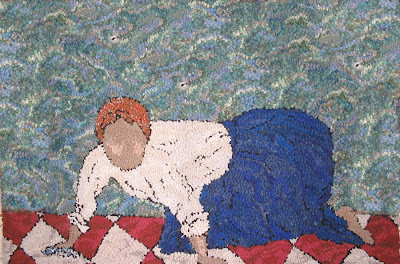 In the last few weeks, since we got back to Santa Cruz, I've been engaged in a frenzy of deep cleaning, getting ready to leave our Santa Cruz home for several months. We have people coming to stay there throughout the time we're away, and I wanted everything to be in the best possible shape for our visitors. It actually felt good, in a way, to empty every drawer, closet, cupboard, box, and junk area and clean it all out. I made numerous trips to the Goodwill drop-off, and to the Dump. By the time I was finished, it was hard to leave. The place looked better than it has in years. Even the garden was glorious, with new plants just getting ready to burst forth, and so many things blooming.

But indeed we left, and after two days of driving north, we made it to our favorite summer location, Whidbey Island, Washington. I brought along lots of good books, my paints, the dog, my bathing suit (for water exercise), binoculars (for the birds) and most of all an intention to enjoy every minute of this lovely place. Picture me here....... 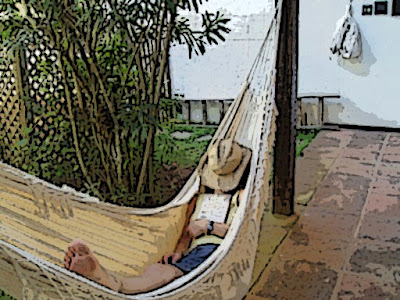