Lifting the Blues, Back in the Pink 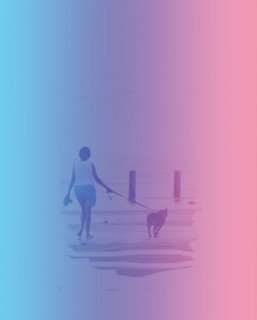 I wrote that I have been feeling blue lately. Part of it is the (delayed) transition from working full time to being a retired person. I find myself wondering how I can be valuable if I'm not working, not taking care of anybody (like my now grown-up kids), not "needed" anywhere in particular. This feeling comes and goes, and when it's around it pulls me down, even though I know in reality that my life is just fine. I have everything I need, good health, love, a comfortable home, friends and family, and the freedom to enjoy each day as I choose. I've had great joy in the results of the recent election, and watching Crummy Rummy hit the dustry trail towards an ignominious finale. It's hard for me to grasp how I could feel sad.

I've discovered some things that have absolutely helped me to lift out of it, and today I'm definitely feeling better. Taking long walks with Zuma around the beautiful neighborhoods of Santa Cruz is a great tonic. In the last couple of weeks I've exchanged long emails with my brother, Tom, in Georgia, whom I miss very much. I had long telephone conversations with my friends Missy in Colorado, Mary in North Dakota, Rosemary (currently in Virginia), Robin in Washington, Johna, Amber, and Mecca here at home, Christopher in LA, brother Dick in Florida, Annarae, Amy, and Margaret, all in Massachusetts, and Michelle in Capitola. I had a wonderful conversation with my daughter Annie last week. Each of these conversations has been helpful and has reflected back to me how loved I am. Sometimes it is hard to remember to reach out for help and reassurance, but I'm so glad I did and so grateful to all the people who are there for me. So today I'm coming back into the pink again. Yahoo!! Thank you dear friends.
Posted by Kim Tyler at 6:25 PM 11 comments:

"How to Live" by Charles Harper Webb, from Amplified Dog.

"I don't know how to live."
–Sharon Olds

Eat lots of steak and salmon and Thai curry and mu shu
pork and fresh green beans and baked potatoes
and fresh strawberries with vanilla ice cream.
Kick-box three days a week. Stay strong and lean.
Go fly-fishing every chance you get, with friends

as you can. Wish them as well as you're able.
Snorkel with moray eels and yellow tangs. Watch
spinner dolphins earn their name as your panga slam-
bams over glittering seas. Try not to lie; it sours
the soul. But being a patsy sours it too. If you cause

a car wreck, and aren't hurt, but someone is, apologize
silently. Learn from your mistake. Walk gratefully
away. Let your insurance handle it. Never drive drunk.
Don't be a drunk, or any kind of "aholic." It's bad
English, and bad news. Don't berate yourself. If you lose

a game or prize you've earned, remember the winners
history forgets. Remember them if you do win. Enjoy
success. Have kids if you want and can afford them,
but don't make them your reason-to-be. Spare them that
misery. Take them to the beach. Mail order sea

monkeys once in your life. Give someone the full-on
ass-kicking he (or she) has earned. Keep a box turtle
in good heath for twenty years. If you get sick, don't thrive
on suffering. There's nothing noble about pain. Die
if you need to, the best way you can. (You define best.)

Go to church if it helps you. Grow tomatoes to put store-
bought in perspective. Listen to Elvis and Bach. Unless
you're tone deaf, own Perlman's "Meditation from Thais."
Don't look for hidden meanings in a cardinal's song.
Don't think TV characters talk to you; that's crazy.

Don't be too sane. Work hard. Loaf easily. Have good
friends, and be good to them. Be immoderate
in moderation. Spend little time anesthetized. Dive
the Great Barrier Reef. Don't touch the coral. Watch
for sea snakes. Smile for the camera. Don't say "Cheese."
Posted by Kim Tyler at 10:35 AM 7 comments:

Gone To The Dogs

It seems I have disappeared from the blogosphere lately. There are many reasons for this - mostly so that I don't bore myself and others silly. Yes, I've been a little blue too. No special reason - maybe it's winter, maybe it's just ........just .........

Anyway, here's some fun I've been having. I'm taking a charcoal drawing class once a week from local artist Marvin Plummer. I've been a long-time admirer of his beautiful work. He mostly does huge drawings of dogs - we're talking 6' or 8' tall here. He also makes exciting huge drawings from old vintage photographs. Anyway, he's teaching us a lot about using charcoal to draw. Here are some of my early results. Many of you might recognize the last two as our dear departed Lola, and our little princess Zuma. 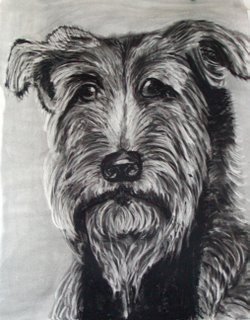 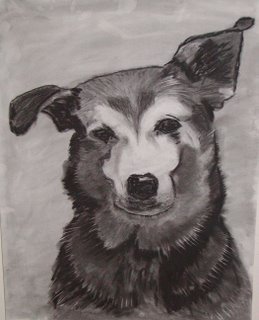 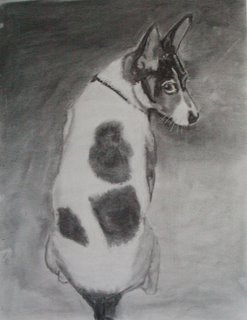 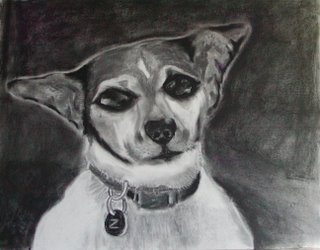 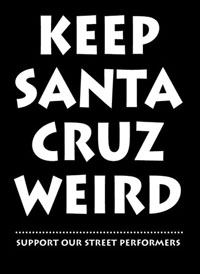 I'll admit to being spoiled living in Santa Cruz. We have great movies here, great restaurants, beaches, open space, redwood forests, a fantastic climate - and so many terrific independent bookstores. Our favorite, Bookshop Santa Cruz, is celebrating its 40th anniversary this month. I remember when I first moved to Santa Cruz in 1966 and the first iteration of BSC opened on the main street downtown. It was tiny, funky, and attached to the big hang-out spot, the Catalyst, which later moved to another spot. Outside, on the front of BSC, was a larger-than-life sized modern metal sculpture of a man and a woman. In the 60's, everything about it signaled "cool place" and we spent many happy hours there slumped in old arm chairs, reading, watching the human scene drift by, and sipping tea from the Catalyst. Over the years the bookshop grew and prospered, until the earthquake of 1989 forced it out of the old building and into a tent. Loyal customers kept on being loyal, and eventually BSC found its way to its current location, a huge store in the middle of downtown, quite near where it originally began.

This past week, as part of their anniversary celebration, we've attended three great events there -part of their ongoing 'visiting authors' series. First was the adorably nutty and quirky Amy Sedaris, author of I Like You: Hospitality Under the Influence, who served cheese balls and tiny cupcakes while pitching her book and simultaneously demonstrating a craft project. Next was her brother, David Sedaris (at a sold out 2500 seat venue on Halloween night, Santa Cruz's biggest holiday). He read many pieces of his work to an audience of wildly costumed Santa Cruzans ready to head out afterwards to the Mardi-Gras like street revels that happen every Halloween in downtown. Anyone who has heard Sedaris on NPR, or read one of his books, knows that his comic voice is unique, sarcastic, and hilarious, and he did not disappoint us.

Best of all the events, however, was last night's evening with Bettina Aptheker, 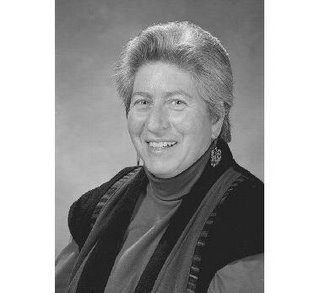 one of Santa Cruz's true local treasures, and someone I'm proud to call a friend. She has just published a memoir, Intimate Politics: How I Grew Up Red, Fought for Free Speech, and Became a Feminist Rebel. This book (which of course I purchased) promises to be a great story of her life. Her presentation last evening was just over-the-top wonderful, warm, intimate, funny, brilliant, and insightful. She has such a passion for life, politics, social change, justice - what an inspiration.

No matter how insane the world gets (and it is at crescendo level these days) I'm so grateful to have a home in one place that seems eminently sane, good old Santa Cruz.
Posted by Kim Tyler at 9:17 AM 3 comments: