We have joined the happy millions who subscribe to Netflix. Since we have no TV on the island, and not much in the way of movie theaters, etc., it is especially appreciated on these long evenings. Here are a few of the things I've been watching and loving:

Reckless - a 4 part series from England, that was on Masterpiece Theater several years ago. It is smart, sexy, funny, surprising, passionate, and beautifully acted. It's about a love triangle, it's contemporary, and it knocked my sox off! 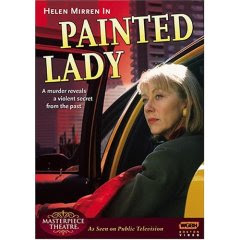 Painted Lady - part of my Helen Mirren immersion. This was also a British film, a murder mystery, and yet another way to showcase the brilliance of Helen Mirren who plays an aging hippy folk-singer. Awesome!

Prime Suspect - This series was also from BBC, and began showing in the early 1990's. Helen Mirren (again) plays the role of Detective Inspector Jane Tennison in an ongoing series of murder investigations around England. Once again, a stellar cast, smart and sparkling scripts, and edge-of-your-chair suspense. Highly recommended.

Second Sight - One more series about detectives. This time, the hero loses his sight in the first episode, but with the sharpening of the rest of his senses, he continues his career as a detective. I haven't finished watching this series yet, but it promises to be another winner.

What prompted much of this was recently seeing a list of PBS TV's lists of most popular programs. I've always been a fan of Masterpiece Theater, but haven't always gotten to watch it. So now I'm catching up on some I've missed.

Do you have any suggestions for our future evenings' entertainment?? (DVD rentals that is...;-)
Posted by Kim Tyler at 5:28 PM 8 comments: 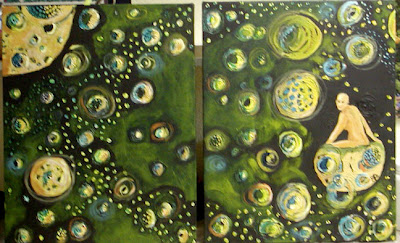 It's the same one from a few days ago, just have been working on it. Here's the newest iteration. Size is two 16" x 20" panels. Acryllic on black gesso. Below is a detail. 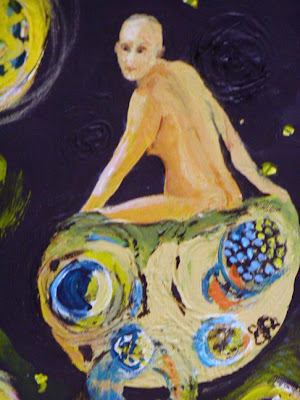 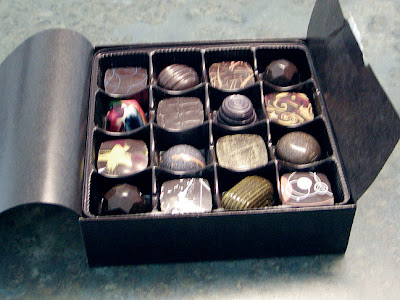 Good chocolate is one of my great loves. Another of my great loves, Daniella, just sent me a generous gift from Kansas City, where she has been taking art classes and attending a Surface Design conference. When we were in KC in September, we found Christopher Elbow chocolates, a tiny shop tucked away in the back of a furniture store, as I remember it. We were stunned! The artistry of these fine sweets is in the combined beauty of each piece as a work of art to look at, as well as a taste sensation to eat! It is hard to disturb the artistry by eating the first piece, and equally hard to decide where to begin to choose. After much consideration I began with Orange Blossom Honey, shaped like a little beehive. It was superb! The promises for the days ahead are phenomenal. Where would you begin?? 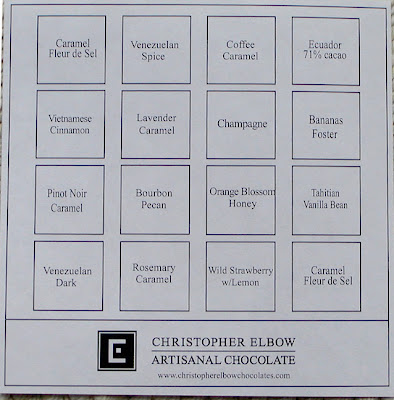 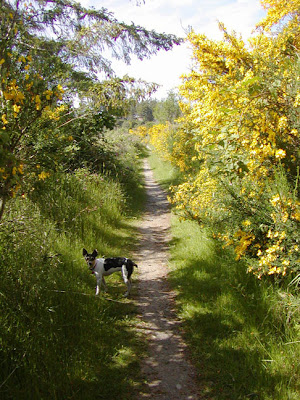 One of my absolute favorite places to walk is kind of a secret spot. I discovered it by accident a few years back. It is a wide earthen dike with a meandering pathway across the top, running between Sunlight Beach and Useless Bay. Scotch broom, wild roses, and blackberries rise up on both sides, opening to breath-taking views in both directions. Bunnies are everywhere - these days, lots of little ones. On one side is a large, muddy bay where the tide seems to be permanently "out". The little rivulets are studded with heron moving in ultra-slow-motion and staring attentively at some potential meal in the water. A wide variety of shore birds scurry busily across the sand. At the far end of the trail, eagles are often sitting in the treetops staring down at us as we pass below. 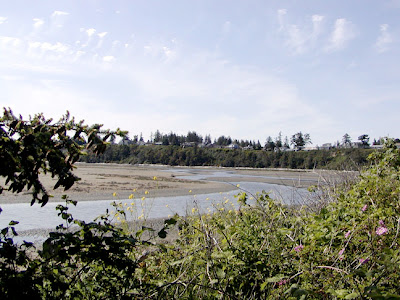 On the other side is lush farmland, with ponds, ducks, marshes, and bucolic views. Kingfishers and swallows swoop overhead. Bees are buzzing in the wild roses. As usual, nobody is ever out there but us. The pathway is about 1/2 mile long I'd guess, and we go over and back. Each time I'm in bliss. Best thing is that this "secret garden" is just a couple of miles from our home up here! 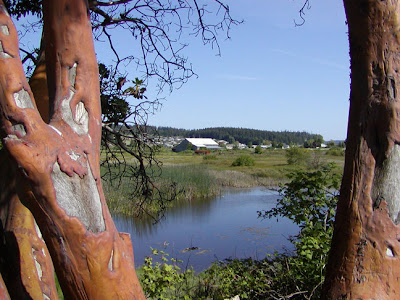 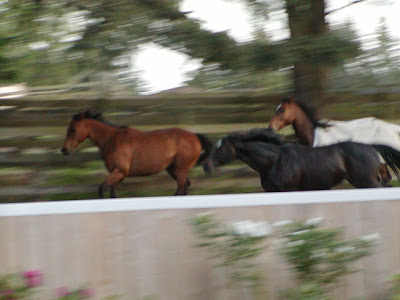 The house where we're spending the summer is surrounded on two sides by horse corrals and pastures. Tonight I was quietly reading and I heard what sounded like distant thunder. Then I realized that the floor was shaking beneath me. I stepped to the back door and was treated to the sight of four beautiful horses running full-out in big loops around the corral immediately over the back fence. I grabbed the camera and tried to capture the beauty and exhiliration of the moment. Apparently those four have just returned to the ranch here after being away for 8-9 months, so they were ecstatic to be "home". They continued to race and kick up their heels and roll in the dirt for about 1/2 hour before they finally settled down. All these photos were taken while I was standing on the threshold of our back door here. These horses are ridden constantly, and used as "polo ponies" in polo matches around the Northwest. 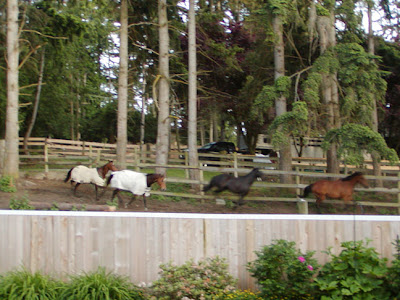 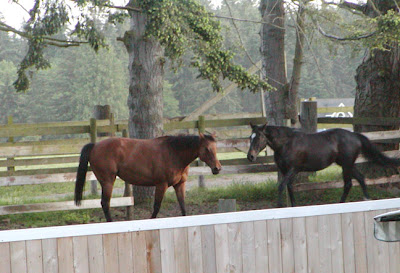 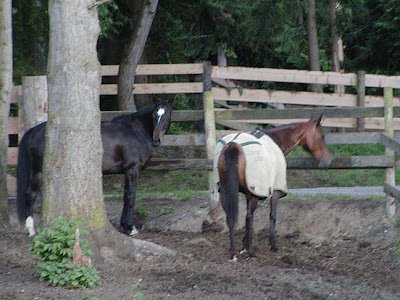