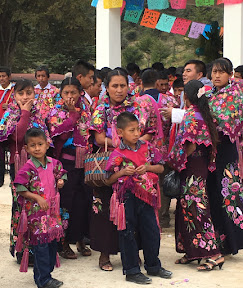 I could write for a week and fail to capture the full, joyful, colorful, mysterious, ancient, inscrutable mind-blowingness of this day. Two festivals, two villages, and words just can't begin to take you there.

In the first, back at Chamula, the action was out in the plaza in front of the little church we visited a few days ago, the one with the incense, pine needles, and endless candles. Costumes, fireworks, a little band playing, all of us drinking whiskey, the saints removed from their glass cases and paraded on palenques around the square (to show them how happy the people are). Of course no photos allowed on threat of going to jail, but it was raucous.

Then onto Zinacandan, where we arrived to a village with tens of thousands of villagers dressed in brocaded pink and red and purple flowered clothing. Men and women and children dress up this way. I have already posted numerous photos on Facebook from this day. Our mouthed were agape all day. Our brains were short/circuiting from so much visual stimulation. And this was even before the parade of clowns, the endless, ear/shattering fireworks, and the stuffed squirrel toss by the jaguar-costumed men who climbed the tree and threw taxidermied animals at each other.

All we can say is that so far My Mexico Tours has provided day after day of extraordinary, and we've only been out a week!thanks Betsy (Pepsi)!
- Posted using BlogPress from my iPhone