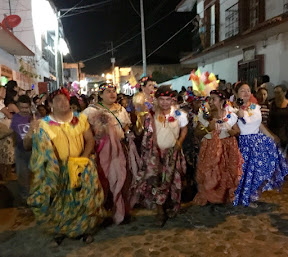 On Thursday night this town turned into a thronging parade of men dressed like women, heavily made up, dancing through the streets in rapture. This is an annual celebration called the Chunta parade, accompanied by reed flutes and drums. This tradition began centuries ago as a precursor to the parachico parade the next day. At that time it was thought to be improper for women to parade in the streets at night, so the men dressed as women on that holiday! It was an amazing spectacle, hundreds of burly, girly men preceded by fireworks in the streets, dancing through the town all night. They went into churches for blessings and into homes where various shrines were set up. We got separated in the crowds and I didn't see anyone from our group for hours, but I walked for many miles following the dancers and then losing them again. What a party! 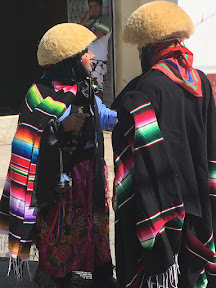 Friday, was the next fiesta, the Parachicas. This parade was even more colorful, since everyone in town dresses up in traditional costume, even the babies. The men dance in black clothing with colorful panchos, chaps, head scarves. They wear traditional hand-carved wooden masks and sisal headdresses that look like scrubbers many of these are also festooned with ribbons. They carry gourd rattles, "chin chin", and as the drummers and flutists play, and the firecrackers explode, the Parachicas shout "viva, muchachas, viva!" The women today dress in long colorful gowns, mostly black lace with embroidered flowers. And the boy and girl children and babies are dressed accordingly. It is a flood of color and noise and joyful energy, and it will continue all day and late into the night. 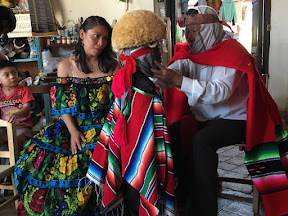 We spent a couple of hours this morning visiting a traditional mask maker (age 81) who talked about his craft. Part of his centuries-old process involves polishing the painted face made from something very specific. It's a tool made from the esophagus of a bull, butchered in the night of a full moon after impregnating a cow. Something about the mix of hormones and moonlight makes this soft, satiny pouch from the esophagus, the perfect tool for this craft! Butchers all around the area supply this need for him. 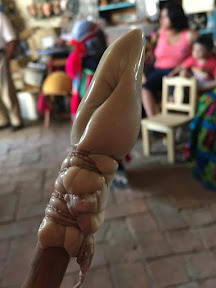 During our visit, his almost-4-year-old grandson was being dressed for the dancing, his first time, and so we got to see all that, the fitting of the headdress, and his joy when he finally got the whole outfit on and began to dance in the middle of the room. He was so excited, and by then the parades had started swarming down their street. Many dancers stopped by to pay respects to the maestro. Eventually we left and went to join the fun! 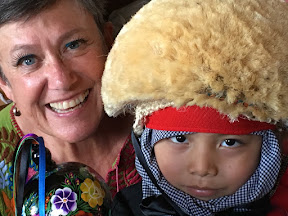 Parades through the streets all day and night, wild dancing (including us gringos), celebrating crowds everywhere! We went to a house where they were preparing a meal for 3000 people today. Meat from 8 cows was laid out on tables in a courtyard, and a crowd of family members was chopping up all the internal organs (Stomach, intestines, liver, etc). for a gigantic organ stew. They made us sit down and eat tamales -delicious - and nobody got sick! 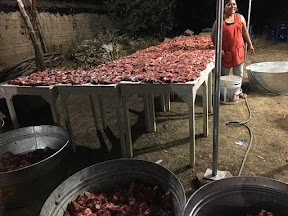 Glorious day, maybe most colorful party ever! Posted using BlogPress from my iPhone