Oops, it was Sunday that we visited these villages, not Monday. Time is kind of a blur in this dreamy world we are experiencing. I forgot that we visited the church in San Andres that morning. We entered the church and noticed that the front vestibule was full of homemade fireworks contraptions. These were constructions made of branches in the shape of framed buildings. All over them were small packets of newspaper tied into dumplings full of gunpowder, so that they looked like art installations of a framework festooned with paper bundles. The church was packed with people, many of them nursing mothers. Then there were a series of huge explosions that sounded as if the church vestibule was being blown up. But no, it was just the fireworks being set off just outside the entry door. The noise was deafening, but the many babies who were in the arms of their mamas hardly made a whimper.

We spent all afternoon in San Juan Chamula, a magical place in every way. Here photos are strictly forbidden, so I downloaded these first two from the Internet. I'll try to describe it with words. As it happened, Sunday was a festival of San Sebastián. We arrived at the town square to find it full of celebrants about to hoist a huge flower garland into the arch of this beautiful little church. It was a arch made of pine boughs, with "viva San Sebastian" woven from white carnations across the archway. The villagers pulled it up with ropes as we watched, and then a small band played and people chanted. In this village everyone wears garments made of sheep wool - black for women and white for men. 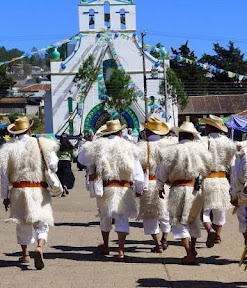 We went around the crowd and entered the church quietly from the side. The inside of the church was breath-taking. Clouds of incense smoke filled the room. The walls were lined all the way to the altar with huge bouquets of fresh flowers. There were no pews, but literally hundreds of burning candles were flickering everywhere along the sides of the room. Fresh pine needles were scattered on the floor about 4 inches deep. The combined fragrances of flowers,incense and pine needles were overwhelming.

Life-sized, white-skinned statues of various saints were displayed in glass cases behind all the candles and flowers. On the floor of the church sat a few very brown-skinned Chamulans with babies, small children, and each had a shamanic healer. They had lots of healing paraphernalia such as eggs, bottles of Coke, live and newly dead chickens (apparently killed right there as part of the healing ritual). Small candles were fastened to the stone floors and burned like fierce forests of light around each supplicant group. The people were murmuring prayers and seemed to be in a trance. Otherwise the church was empty since most people were out on the square celebrating. 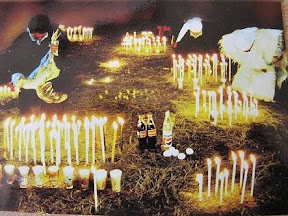 It was very emotional, spiritual, magical. Apparently the Church tolerates these practices, and there are seldom any priests around. I wished for my camera, but was also glad not to have it so I could immerse myself in the moment.

Then there were a series of huge explosions that sounded as if the church vestibule was being blown up. But no, it was just the fireworks being set off just outside the entry door. The noise was deafening, but the many babies who were in the arms of their mamas hardly made a whimper.

After we left we made our way through the market stalls lining the streets outside, to "make shopping". The photo below shows Betsy buying a black wool shawl from a Chamula woman wearing a matching black wool skirt, the traditional outfit. 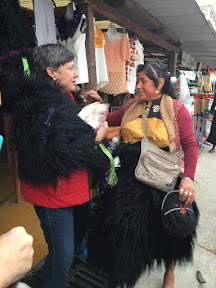 Later in the evening we went to a Zapatista cafe for a light supper. I ordered something random called a "fundita" made with cheese from Chihuahua. It turned out to be fondue, delicious, creamy good. But Judy and I started laughing at the notion of how many little chihuahuas it must have taken to get that bowl of cheese. We got pretty silly and I was reminded of traveling together in Korea when we could not stop laughing. Missed you, Wendy!
- Posted using BlogPress from my iPhone